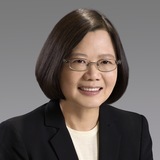 President of the Republic of China (Taiwan)

Dr. Tsai represented the DPP in Taiwan's 13th-term presidential election in 2012, becoming Taiwan's first female presidential candidate. She ran again as the DPP candidate in 2016, and was elected as the nation's 14th-term president. The first female head of state in Taiwan's history, Tsai Ing-wen is also the first female head of state in Asia who was not born into a political family. Dr. Tsai represented the DPP in the nation’s 15th-term presidential election in 2020 and was successfully re-elected with over 8.17 million votes, the highest total in history. Dr. Tsai was officially sworn in as the 15th-term President in May and concurrently serves as DPP chairperson.