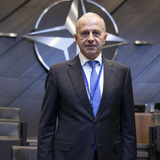 Mr Geoană was born in Romania on 14 July 1958. He studied at the Polytechnic University in Bucharest, the Faculty of Law of the University of Bucharest, the Ecole Nationale d’Administration in Paris, and he holds a PhD from the Economic Studies Academy of Bucharest. Mr Geoană has served as a diplomat and a politician, and in 2009 was his party’s candidate to be President of Romania.