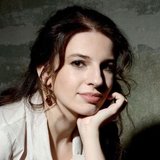 Marina Weisband, German-Ukrainian psychologist and expert in digital participation and education. From 2011 to 2012, she was political secretary of the Pirate Party Germany, where she was responsible for strategy development within the party and for external representation.

Today, she is involved with the Green Party in the areas of digitization and education. In her book "Wir nennen es Politik" (We call it politics), she describes the possibilities of new democratic forms through the use of the Internet for those new to politics.

Since 2014, she has been leading the project "Aula", a concept for political education and liquid-democratic participation of young people in the rules and affairs of their schools and extracurricular organizations.

She is a frequent commentator and talk show speaker on German TV on the ongoing Russian war in Ukraine, has a regular radio column at Deutschlandfunk and is co-chair of D64, the Center for Digital Progress.