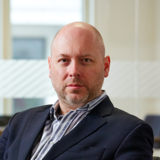 Ben Crawford is the CEO of CentralNic Group Plc, a company he IPO-ed on the London Stock Exchange in 2013, and has grown from $2M in revenues to over $600M, through a combination of organic growth and acquiring companies renowned for their excellent tech, people and customers - including Instra, Key-Systems, Codewise and Safebrands.

CentralNic is dedicated to building the global digital economy, with customers ranging from small businesses in virtually every country, to some of the world’s largest corporations, and Governments across four continents. Mr. Crawford himself is a regular contributor in print and events to discussions on the transformative evolution of the internet.

Ben specializes in developing international media and technology businesses, through a combination of business development, including personally negotiating many multi-million-dollar contracts, and M&A activity, having completed and financed 30 acquisitions to date.

Ben's previous positions include President of Louise Blouin Media in New York, Managing Director of SportBusiness Group in London and Executive Producer of the Official Website for the Olympic Games in Sydney, as well as managing significant internet projects for Microsoft in the 1990s.

Ben is a member of the World Economic Forum, the Forbes CEO Council, the United Nations’ International Telecommunications Union and the European Internet Forum. Ben is also a widely-published writer, featured in the New York Times, Forbes, the South China Morning Post, Politico, Robb Report, and others. Ben is a true believer in the power of technology, business and a spirit of collaboration to bring the world closer together.