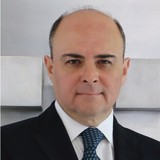 Sergio M. Alcocer is a Research Professor in the Institute of Engineering of the National Autonomous University of Mexico (UNAM). Alcocer is Founder and President of México Exponencial, a think tank for the development of public policy and strategies for embracing exponential technologies in Mexico.

He was the Undersecretary for North America in the Ministry of Foreign Affairs, and the Undersecretary for Strategic Planning and Technology Development of the Ministry of Energy of the Mexican Government. At UNAM, he was Secretary General (Provost), Coordinator for Innovation and Development, and Director of the Institute of Engineering. He is member of the Advisory Committee on Structural Safety of the Mexico City Government.

Alcocer is a Distinguished Engineering Alumni of the Cockrell School of Engineering of the University of Texas at Austin. In 2019, Alcocer was recipient of the Charles S. Whitney Medal of the American Concrete Institute.

He received his BSc in Civil Engineering from UNAM, and a PhD in Structures from The University of Texas at Austin.