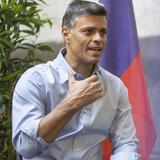 Leopoldo López is a Freedom Activist from Venezuela. He was a political prisoner from 2014 to 2020 after being sentenced to fourteen years in prison for leading non-violent street protests and civil resistance in 2014. After spending seven years in confinement, he managed to escape the autocratic regime of Nicolas Maduro in October of 2020 and was able to travelled to Spain where he lives with his family.

From 2000 to 2008 Leopoldo López was mayor of the Municipality of Chacao in Caracas and was later illegally disqualified to run for office. He won his case at the Inter American Commission on Human Rights (IACHR). In 2009, he founded the political party and freedom movement called Voluntad Popular (Popular Will) and became its national coordinator. At present, Leopoldo López is a visiting fellow at the Wilson Center in Washington, D.C and a lecturer in the Freeman Spogli Institute for International Studies in Stanford University. Studies: Bachelor´s degree cum laude in Sociology and Economics from Kenyon College (1993). Master´s degree in Public Policy from the John F. Kennedy School of Government at Harvard University (1996). Lopez was awarded a honoris causa doctorate in Law from Kenyon College in 2007.

Books: Venezuela Energética. Oil and energy proposal to leverage the well-being and progress of the citizens of Venezuela. (2017). Preso pero Libre (Freedom Confined) Reflections of Lopez experience in prison (2016).

Awards: NED´s 2013 Democracy Award and Sakharov (2017) among others. He is married to Lilian Tintori and has three children.