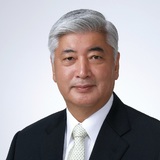 His administrative roles have included residing as Parliamentary Vice-Minister for the National Land Agency, for Home Affairs, and of Posts and Telecommunications. He has also served as Minister of State for Defense.

He first ran for elected office as a Liberal Democratic Party candidate in the 1990 general election and won one of five seats representing Kōchi Prefecture.