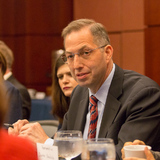 Ambassador Derek Mitchell became President of the National Democratic Institute in September 2018, bringing decades of distinguished experience in international diplomacy and foreign policy. From 2012 to 2016, Derek served as the U.S. Ambassador to the Republic of the Union of Myanmar (Burma), America’s first ambassador to the country in 22 years.

Prior to his service in the Obama Administration, Derek was Senior Fellow and Director of the Asia Division of the International Security Program at the Center for Strategic and International Studies (CSIS). From 1997 to 2001, he served as Special Assistant for Asian and Pacific Affairs in the Office of the Secretary of Defense, where he was the principal author of the Department of Defense’s 1998 East Asia Strategy Report.

Derek first joined NDI as Senior Program Officer for Asia and the former Soviet Unionfrom 1993-7. He began his Washington careeras a foreign policy assistant in the office of Senator Edward M. Kennedy (D-MA) from 1986-88.

Derek speaks Mandarin Chinese proficiently. He has authored numerous books, articles, policy reports, and opinion pieces on international affairs. He received a Master of Arts in Law and Diplomacy from the Fletcher School at Tufts University and a Bachelor’s Degree from the University of Virginia, and was a visiting scholar at Peking University in 2007.