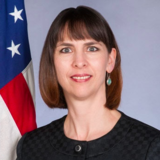 Lisa Peterson joined the U.S. Foreign Service in 1989. She joined the Bureau of Democracy, Human Rights, and Labor (DRL) as Principal Deputy Assistant Secretary in December 2020. On January 20, 2021, she began serving as the Senior Official for Civilian Security, Democracy, and Human Rights (J) and Acting Assistant Secretary for DRL. She served as Ambassador to the Kingdom of Eswatini (Swaziland) from 2016 to 2020. Prior to this current assignment, she served as Director for the Office of Multilateral and Global Affairs in the Bureau of Democracy, Human Rights, and Labor from 2012 to 2015. From 2009 until the summer of 2012, Lisa served as Deputy Chief of Mission at the U.S. Embassy in Yaounde, Cameroon. Prior to that, she served in political, public affairs and consular positions in Nigeria, Kenya, Zambia, Zaire/Democratic Republic of the Congo, South Africa, and the Central African Republic.

Other Washington assignments have been in the Bureau of African Affairs, where she was Deputy Director in the Office of Central African Affairs, and in the Bureau of Intelligence and Research, where she was an analyst for Bolivia, Ecuador, and Peru. Her political work has included tracking democratic transitions, monitoring human rights issues, following refugee issues, and supporting peace negotiations in DRC, Sudan, and Somalia. As DCM in Cameroon, she coordinated the efforts of five agencies to initiate a PEPFAR county operational plan.

US Global Leadership in an Alliance of Democracies?
Lisa Peterson
Monday May 10, 18:05