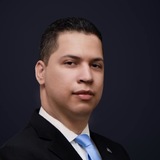 Jatzel Roman is the Deputy Minister for Foreign Affairs of the Dominican Republic. Before taking office at 29 years of age in 2020, he was Executive Director for the Latin American Youth Network for Democracy which brought together over 100 organizations in 20 countries, united in the commitment to a region that is free of authoritarianism. Experienced in electoral matters, he has been an international observer for 30 elections in 23 different countries, taking part in missions such as those deployed by the Organization of American States (OAS). A member of the Generation Democracy initiative launched by the International Republican Institute (IRI) and alumni of the Konrad Adenauer Foundation (KAS) as well as the World Movement for Democracy, Deputy Minister Roman has participated actively in the global agenda for the strengthening of institutions.

Frequent op-ed writer in newspapers throughout Latin America and news contributor for various television channels, Jatzel has kept democratic ideals at the center of his message. Politically, he has held the position of International Secretary for the Social Christian Reformist Party and Vice Chairman of the International Young Democrat Union (IYDU).Currently, he has been assigned leadership of the regularization program for Venezuelan nationals currently in the Dominican Republic, displaced by the Maduro dictatorship in the biggest migratory crisis in the Western Hemisphere.