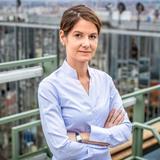 Tanit Koch is a German journalist, moderator and former media executive. She is co-host of the business-meets-politics podcast „Die Stunde Null“ and columnist of the British weekly „The New European“. She was managing director of the German news channel n-tv and editor-in-chief of RTL‘s integrated newsroom. She is a regular speaker and commentator on current affairs in national and international media.

Until March 2018 Tanit Koch was editor in chief of the largest German newspaper BILD. Previously she held several positions within Axel Springer SE, among others as deputy editor BILD, bureau chief of BILD HAMBURG and senior editor within the editorial board of WELT Group. She started her career in 2005 with a journalistic training at the politics/business desk of BILD and the Axel Springer Journalism School.