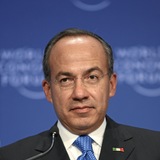 Felipe Calderón served as president of Mexico from 2006 - 2012. During his term Calderón oversaw the passage of legislation to reform Mexico’s judicial system, and he worked to strengthen the energy sector, increase the number of jobs, and fight crime and drug cartels.

Calderon was credited with bringing greater economic stability to the country. However, questions about his government’s efforts to curtail cartels drew harsh criticism, especially as violence continued and human rights were allegedly abused. Barred from seeking a second term, Calderón left office in 2012. Six years later he quit PAN, and in 2019 he cofounded a new party, Free Mexico.

Calderón studied law at the Free School of Law in Mexico City and later did postgraduate study in economics at the Autonomous Technological Institute of Mexico. In 2000 he earned a master’s degree in public administration at the John F. Kennedy School of Government at Harvard University.