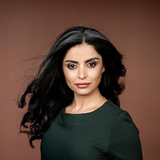 Sara Omar is a Danish-Kurdish Author and human rights activist. Sara has lived in Denmark since 2001. She was born and raised in Kurdistan but fled the country in late 1990 because of war.

Sara Omar received a Master of Political Science, is a member the Expert Advisory-panel for Arts & Globalization and a board member of some of the Danish women organizations. In 2017 Sara Omar debuted with the novel 'Death Washer' and in 2019 the sequel 'Shadow Dancer' followed.

Sara received the Danish literature award 'the readers book prize' for her novel Death Washer in 2018 and has been awarded the honorary award of the Danish newspaper Extra Bladet, 'Årets Victor', which is given to journalist, writers, photographers, or cartoonist who lives up to the critical journalism that the paper stands for. In 2020 she received both the literary award as well as the ward for human rights of the foundation Martin Andersen Nexø Fond.

In 2020 Sara Omar was awarded the Golden Laurel, the price of Danish bookshops, for her novel Shadow Dancer.