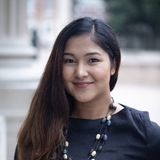 Burmese activist and the founder and Executive Director of the Women Peace Network in Myanmar.

Wai Wai Nu is a former political prisoner and the founder and Executive Director of the Women Peace Network in Myanmar. She spent seven years as a political prisoner in Burma. Since her release from prison in 2012, Nu has dedicated herself to working for democracy and human rights.

Through the Women Peace Network, Nu works to build peace and mutual understanding between Myanmar’s ethnic communities and to empower and advocate for the rights of marginalised women throughout Myanmar, and particularly in Rakhine State. To engage youth in the peacebuilding process to promote democracy education, Nu founded the Yangon Youth Center – a space where young people from diverse backgrounds can come together to learn, share, and explore their ideas and promote leadership in social, political, and peace-building. Nu organised the My Friend Campaign with youth from different communities to promote tolerance and to reduce discrimination among diverse groups. Through her work, she has been recognised as a Champion of Prevention by the United Nation’s Office of the Prevention of Genocide and Responsibility to Protect. In 2014, Nu Co-Founded Justice for Women in Yangon, a legal and advocacy organization that works with victims of gender-based violence and provides pro-bono legal consultation.