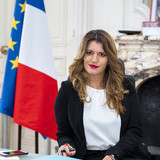 Marlène Schiappa is a writer, politician. She studied at the Claude Bernard high school and received a Master’s Degree of Sorbonne University in geography and in communication and new media (Grenoble University).

Schiappa was previously an assistant then in charge of monitoring New Media at Euro RSCG agency (2007), she was the Founder of Les Pasionarias webzine (2007), a Journalist (Yahoo.fr, Lagardère). Previously, she was the Founder of a web production agency, Bondy World associate (Bondy-Blog), the Editorial director of Pampa Press, Trainer at the Ecole nationale d'administration (ENA), Lecturer, Founder and President of the blog then social medium Maman travaille (working mothers) (2008).

Schiappa was the Deputy Mayor of the city of Mans, Delegate to Equality (fight against discriminations, equality between men and women, follow up of the LGBT chart) (2014-17), Co-founder of the Movement of French elected for equality (MEFE) (2014), Community Advisor of Mans metropolis, Delegate to technological innovation and to the economic attractiveness of the territory (2016-17), Collaborator with Laurence Rossignol (Minister of Families, Childhood and Woman’s rights) (in 2016), Delegate to Sarthe and Manager of Equality between women and men division in the political pavement En marche! (2016-17), Member of the national Investiture Committee of La République en marche, responsible for electing candidates for the legislative election (in 2017). Schiappa was the Minister of Gender Equality (2017-2020) and is now the Minister Delegate of Citizenship, attached to the Minister of the Interior (since 2020).