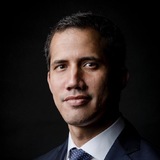 Juan Guaidó was born on July 28th, 1983 in Vargas Venezuela. His farther is a former airline pilot and his mother is a high school teacher. Juan Guaidó lived through the 1999 Vargas tragedy, a natural disaster that killed many of his closest friends and destroyed his school and home, leaving him and his family homeless. This tragedy influenced his political views after then newly elected government of Hugo Chávez provided an inadequate response to the disaster.

He is recognized as the interim president of Venezuela by 60 countries and OAS.