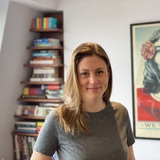 Colombe has been working on cross-border mobilisation to tackle global issues in a progressive manner for years. As the co-founder of the global campaign movement NOW!, she has created a +10,000 people strong organization to promote democracy worldwide, proposed drastic actions to curb the climate crisis, advocated for a higher participation of women in political power, and pushed for a fairer distribution of COVID-19 vaccines, among many other topics. She is also working on Forward, the global political project working to elect a people-backed progressive candidate as the next leader of the United Nations! Previously, she co-founded the political movement Volt Europa that mobilized 60,000 young people across Europe and elected representatives at the 2019 European Elections and local elections.